DIRECTOR FROM THE SEA

Born in 1967 in the Indian state of Kerala, well known for its rich cultural heritage, Dr. Sohan Roy, the CEO and founder of Aries Group of Companies, has a glittering record of achievements with a rare combination of experience garnered from the Maritime, Visual Media and Film Production Industries as a Marine Engineer, Naval Architect, Marine Surveyor and Hollywood Director. He has decades of experience in executing naval architectural engineering & design projects all over the world with a Guinness Book Entry for the longest Snake boat design and several other creative designs like BOTEL, Topless Ships etc. He also holds a global reputation as Director, Creative Head of award winning films & documentaries and Project Designer of World’s second CSR movie – Aickarakkonathe Bhishaguaranmaar.

He is also the president of International Maritime Club (IMC) and the founder of the first global maritime TV channel, Marine BizTV. His debut Hollywood venture as the movie director of ‘DAM999′ triggered worldwide debates & rethinking on dam safety and its ecological impact. The movie was shortlisted for the Oscars and its script written by him has been selected by the Oscar Library to its permanent core collection. His documentary titled “DAMs – the Lethal Water Bombs? has won 23 International Awards. He has 6 International technical paper presentations and 25 fully developed creative research products to his credit. Aries International Maritime Research Institute (AIMRI) is the latest in the row of his creative Concepts. He is a free spirited individual who is in constant search of ultimate experiences which can fire his imagination and creativity. In his leisure time, Dr. Sohan Roy the entrepreneur is known to immerse himself in various disciplines which drive him to learn and experience new things in life.

A Creative Designer by profession and a Visionary by action, Dr. Sohan Roy has a glittering record of achievements with a rare combination of experience in Cinema, Visual Media, Medical and Maritime Industry. His debut directorial venture DAM999, a 2D to 3D converted Movie of India made in the Hollywood format, became the first Movie from India to enter Mainstream Oscars with five selections in three categories. The movie script written by him found its place in the Oscar Library, and the curtain raiser documentary "DAMS- The lethal Water Bombs" went on to win 23 International Awards and numerous industry accolades.

He is also the producer and Project Designer of various International Movie Projects, and promoter of Indian Movies at International Film Festivals. His passion towards technology drove him to set up Ariesplex, the first dual 4K ATMOS theatre in the country, and establish the first Total security Studio Network Platform complying Motion Picture Association of America standards to execute post-production works of international projects in India along with co-production and distribution support. His revolutionary US $10 Billion initiative, Project Indywood, is an innovative integration tool that aims to integrate and revamp the entire Indian Film Industry within 5 years.

Dr. Sohan Roy is also the CEO and founder of Aries Group of Companies, a consortium of 53 companies from 15 countries with its headquarters in the UAE. A Naval Architect by Profession and a Guinness Entry recipient, he also holds a Diploma in Film Direction from the Hollywood Film Institute. He is consistently listed among the Top 40 Indian leaders of Middle East by the Forbes Magazine.

Dr. Sohan Roy started his career as a Marine Engineer and initiated Aries Marine, the flagship company of Aries Group and the largest Ship Design and Consultancy firm in the Middle East in the year 1998.

His passion towards cinema encouraged him to establish his foothold in Visual Media with the launch of the first Global Maritime TV channel, Marine BizTV and Medical Channel, Medi BizTV, generating more than 8530 hours of infotainment content in the last 10 years. His event management skills to identify young talents required for the visual media through talent search competitions initiated a revolution in 2004 among youngsters. These talent scouts have identified many new generation Film Makers and Actors who are now the pride of our present Film Industry. Dr. Sohan Roy is an accomplished performance driven professional and a proven leader, credited with pioneering innovations and is a force to reckon with.


Dr. Sohan Roy is married to Abhini, an exemplary interior designer, a gifted dancer and a quality artist who also teaches classical dance, art and craft. He has two beautiful and talented twin daughters, Nivedya and Nirmalya. They have inherited the talents of their parents and both of them are gifted dancers, trained in classical dance and Russian Ballet. 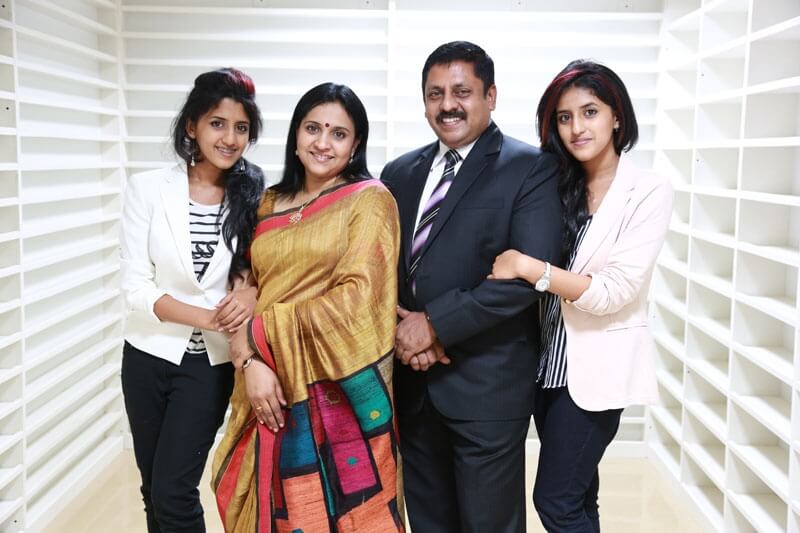